This article is printed by permission of Mac Whatley, who has done extensive research into the beginnings of Franklinville and the textile industry. Published August 3, 2015 in the Raleigh Register About Independence Day, 1842. Article mentions a small town in Randolph County called Frankinsville.

The Raleigh Register and North-Carolina Weekly Advertiser was published weekly in Raleigh beginning in 1799, and in variousformats and title variations to 1852. Its publisher, Joseph Gales, was a well-known British immigrant who was sympathetic to the French Revolution and Thomas Jefferson. It was a leading political voice in North Carolina, first for Jefferson’s Republican Party and later for the Whig Party. Gales became one of Raleigh’s leading citizens and advocated for internal improvements and public education. He privately favored the emancipation of slaves and publicly advocated for the American Colonization Society. He served several terms as Mayor of Raleigh, and was doing so when he died, 24 Aug.

His son Weston Gales was editor and publisher of the newspaper in July 1842.

The writers had to be specific, as most readers in Raleigh and the rest of the state would not have been familiar with the tiny community, less than 4 years old.  Modern Franklinville is made up of two initially independent mill villages, Franklinsville and Island Ford, separated by about three-quarters of a mile of Deep River.   The original Franklinsville mill village was developed by the mill corporation beginning in 1838, on property adjoining the grist mill on Deep River belonging to Elisha Coffin.  Coffin, a miller and Justice of the Peace, purchased the property in 1821. [Deed Book 14, p.531 (Ward to Elisha Coffin, 25 Dec. 1821)] Coffin was the initial incorporator of the factory, and developed the new town on the slope between his house and the mills.  The community formerly known as “Coffin’s Mills on Deep River” had “assumed the name of Franklinsville” by March 8, 1839.   Officially named to honor Jesse Frankin, a former N.C. Governor and Congressman from Surry County, unoffically Coffin and his anti-slavery family and investors apparently meant to honor Franklin  for his crucial vote to keep slavery out of the Northwest Territory (now Ohio, Indiana and Illinois).  “Franklinsville” was officially recorded in the town’s 1847 legislative act of incorporation.[ Chapter 200, Private Laws of 1846-47, ratified 18 Jan. 1847].  The community surrounding the factory was the largest urban area in Randolph County until 1875.

“The Visitors… amounted to 1200 or 1500”-
The entire population of modern Franklinville is less than 1500;  the 1840 census of Randolph county found the total population to be 12,875 people, so if 1500 people actually attended this event, that would have constituted about 11% of the residents of the entire county in 1842.

“The Franklinsville Volunteer Company of Light Infantry”-
The state militia, organized by county and divided into “Captain’s Districts,” had been the foundational political body in North Carolina since colonial times.  The militia had been reorganized in 1806 (Revised Statutes, Chapter 73) to allow “Volunteer”companies raised by private subscription in addition to the official “Enrolled” companies made up of “all free white men and white apprentices, citizens of this State, or of the United States residing in this State, who are or shall be of the age of eighteen and under the age of forty-five years…”   Enrolled companies were known by the name of the commanding Captain, and Randolph County was divided geographically into about 12 Captain’s Districts, which functioned much like modern voting precincts.  Each district had its own “muster ground,” and four times each year were required to assemble and practice military drills.  One of the annual musters was usually also election day, and the men voted by district.

Prior to the creation of the new town of Franklinsville, men of that area of Deep River were considered to be part of the “Raccoon Pond District,” unusual in the fact that it was named after a geographical feature and not after its Captain.  As Captains often changed, making the location of muster fields and districts hard to pin down, this distinction allows us to pinpoint the area of the Raccoon Pond District, even though the pond has over the years silted up and is no longer known as a modern landscape feature.  Raccoon Pond (by the account of Robert Craven and other local residents) was situated at the base of Spoon’s Mountain, south of the modern state road SR 2607 and west of its intersection with SR 2611, Iron Mountain Road.  The Spoon Gold Mine was located in the area later in the century, and probably helped to silt up the pond.  The enrolled militia of the Raccoon Pond District in 1842 was evidently headed by Captain Charles Cox. 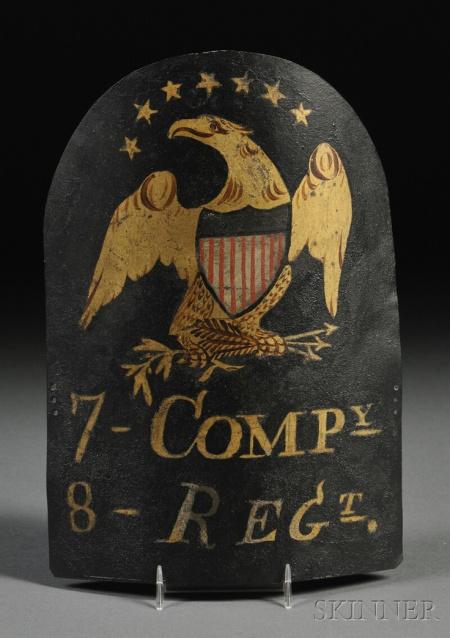 Volunteer militia companies were considered the elite of the citizen army and their members were exempt from service in the enrolled companies.  Because they were organized and equipped by those who could afford to raise their own private company, volunteer companies enjoyed preferential placement in reviews, and were often the last to see actual service.  Volunteer companies also functioned as social organizations, sponsoring dances and suppers to entertain ladies; could dress themselves in elaborate uniforms, and were usually known with impressively martial names such as “Dragoons,” “Light Infantry,” or “Grenadier Guards.”  The “Fayetteville Independent Light Infantry,” formed in 1793, is a unique survivor of this type, and  is known as “North Carolina’s Official Historic Military Command”  They provide an honor guard at special events, funerals and dedications.
http://www.fili1793.com/  The Washington Light Infantry (WLI), organized in Charleston in 1807, is another of these old original militia units, named in honor of George Washington.

Independence Day OSV 2Technically, light infantry (or skirmishers) were soldiers whose job was to provide a protective screen ahead of the main body of infantry, harassing and delaying the enemy advance. Heavy infantry were dedicated primarily to fighting in tight formations that were the core of large battles.  Light infantry sometimes carried lighter muskets than ordinary infantrymen while others carried rifles. Light infantry ironically carried heavier individual packs than other forces, as mobility demanded that they carry everything they needed to survive.  Light infantrymen usually carried rifles instead of muskets, and officers wore light curved sabres instead of the heavy, straight swords of regular infantry.
The name “Franklinsville Volunteer Company of Light Infantry” was evidently a cumbersome mouthful, as it was officially recognized in 1844 as the “Franklinsville Guards.”  See the Session Laws of the General Assembly of 1844/45:  The legislature went into session on 18 Nov. 1844, and Henry B. Elliott of Cedar Falls was accredited to represent Randolph County (Senate District 35).   (Thurs. 11-28-44) “Mr. Elliott presented a Bill, entitled A Bill to incorporate the Franklinsville Guards in the County of Randolph, which was read the first time and passed.” (p57). The Bill was passed a second time by the Senate on Monday 2 Dec. 1844 (p78); and passed and third time, engrossed and ordered to be sent to the House on Tuesday 3 Dec. (p84).  The House of Commons received the engrossed bill and a note “asking for the concurrence of this House” on 23 Dec.; it was read the first time and passed that day (p277), and was passed the final time on Jan. 1, 1845 at 6:30 PM. (p652).